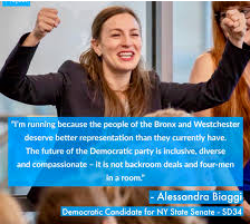 IT IS TIME to elect a REAL Reproductive Rights Advocate to represent the New York State 34th Senate District.
Alessandra Biaggi is THAT Person!

Alessandra is an outspoken champion of women’s reproductive rights. She is a 100% pro-choice advocate.

When elected – unlike her opponent, the incumbent – Alessandra will dedicate all her efforts to the passage of:

Alessandra will work to:

WE MUST STAND UP AND FIGHT FOR NY WOMEN.
The sitting president and anti-choice Republican-controlled Congress now in Washington DC are committed to stripping women of all of our constitutional rights to control our own bodies – those very rights that were acknowledged by US Supreme Court decisions in the late 1960’s and 1970’s. The president’s nominee for the US Supreme Court is an outspoken opponent of abortion rights and is committed to overturning Roe v. Wade.
WE MUST DO EVERYTHING IN OUR POWER TO PROTECT NY.

That starts with defeating Alessandra’s OPPONENT in the NYS Primary on September 13th.

ABOUT ALESSANDRA’S OPPONENT:
HER OPPONENT created the so-calIed Independent Democratic Conference (IDC) in 2011, and took in 7 other rogue Democrats. This group literally stripped the majority away from the Democrats in the State Senate by throwing their voting power in with the Republicans and sharing power with them — all the while deceiving their own constituents by not telling the voters about their slight-of-hand actions. Her Opponent then anointed himself King of the IDC which has empowered many of the very Republican State Senators who lead the charge to elect Donald Trump.

As the creator and head of the IDC, her Opponent single-handily blocked all progressive legislation including reproductive health bills from coming to the floor of the New York State Senate for a vote.

VOTE for ALESSANDRA BIAGGI ON THURSDAY, SEPTEMBER 13TH!
(This Democratic Primary is on a Thursday, not Tuesday!)

By supporting pro-choice candidates in your state and local elections, you can make New York a Reproductive Rights Sanctuary and protect our state against Trump attacks.